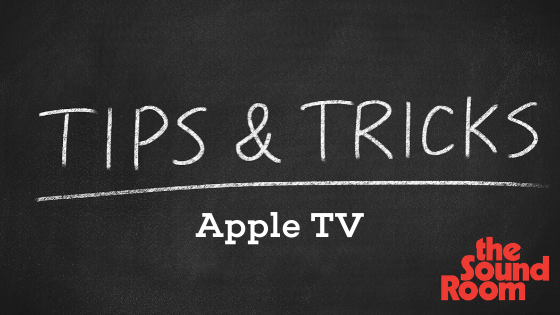 Just like with your smartphone, things can go awry with apps on Apple TV. Sometimes they lag or stop responding altogether. When this happens, your best option is to simply force close the app.

To force close an app, double-press the TV or Home button swipe left or right to highlight the app and swipe up on the Siri remote touchpad.

THE APPLE TV IS ACTING GLITCHY

Sometimes it’s more than just one app that’s acting up. Also, from time to time, while the Apple TV is connected your wireless network and there is internet access, it’s as if the apps just aren’t receiving data, for no clear reason.

If the Apple TV is doing either of these things or is acting glitchy in general, it’s best to just reboot it. You can do this by going to Settings > System > Restart, or by holding the Menu and TV button until the light on the front of the Apple TV begins blinking rapidly. When you release the two buttons on the remote, the Apple TV will restart.

THE APPLE TV WON’T TURN ON

It may also be the case that the Apple TV is turning on, but the video signal isn’t displaying. Check the HDMI connection and that the TV is set to the correct input. If everything is plugged in and set as it should be, try cycling output resolutions on the Apple TV itself. To do this, hold Menu and Volume Down on the Siri remote for approximately five seconds.

If the Siri remote stops working, first try charging it via the Lightning port along the bottom edge of the remote. You can check the charge level on the Apple TV under Remotes & Devices by using an iOS device as a remote.

If that doesn’t work, try resetting the remote by putting it into pairing mode. Do this by holding the remote close to the Apple TV and holding Menu and Volume Up buttons for two to three seconds.

THE PLAY BUTTON ON THE SIRI REMOTE ISN’T WORKING

From time to time, everything with the Siri remote will work as intended except for the Play button. Pressing it won’t do anything at all, regardless of what app you’re in. The obvious workaround is to simply click the trackpad to play and pause. But if you’d like to get the Play button to function again, try one of two things: pair the remote again or reboot the Apple TV.

To put the remote into pairing mode, move near the Apple TV and press and hold Menu and Volume Up for a few seconds. If that doesn’t work, restart the Apple TV by pressing and holding the Menu and TV buttons until the light on the front of the Apple TV begins blinking rapidly. Release and the Apple TV will restart.

Every so often, without explanation, audio will cut out on the Apple TV. Obviously, this will depend on your setup and settings, but if it happens to you, try restarting the television and any audio hardware connected to the Apple TV, such as a sound bar.

This will usually solve the problem. If it doesn’t, however, try restarting the Apple TV. Also, make sure your audio settings are correct. Go to Settings > Audio and Video and ensure the correct speakers are selected for Audio Output and Audio Mode is set to Auto.

If you’ve installed a lot of applications or games on your Apple TV, storage space might get tight over time. The obvious solution is to remove unused apps and games. However, if you choose to do this from the home screen, it will take four steps to remove each app:

If you’re removing multiple apps, this could take quite a while. A faster way to remove apps that also shows how much precious storage space is being used by each app is to go to Settings > General > Manage Storage. Applications will be sorted in descending order by file size. Just click the trash can icon to the right of an app and click Delete to remove each app.

AirPlay lets you stream media or mirror the screen of your Apple devices to your television at the press of a button. While it works flawlessly most of the time, it’s not perfect and will occasionally put up a fight.

If you try to enable AirPlay from your Mac, iPhone ($900 at Boost Mobile) or iPad ($233 at Amazon) and you don’t see the Apple TV you want to stream to, double-check that AirPlay is enabled on the Apple TV. To do this, go to Settings > AirPlay and beside AirPlay, make sure it says either Everyone or Anyone on the Same Network. If you choose Everyone, anyone nearby with an iOS device or Mac will be able to stream to your Apple TV (unless you required a password). If you set it to Anyone on the Same Network, only those with access to your Wi-Fi will be able to stream to the Apple TV.

To make your life easier, make sure to set an easily distinguished name while you’re in AirPlay settings. Click on Apple TV Name and give it a unique name, such as the room it’s in.

When you subscribe to the blog, we will send you an e-mail when there are new updates on the site so you wouldn't miss them.